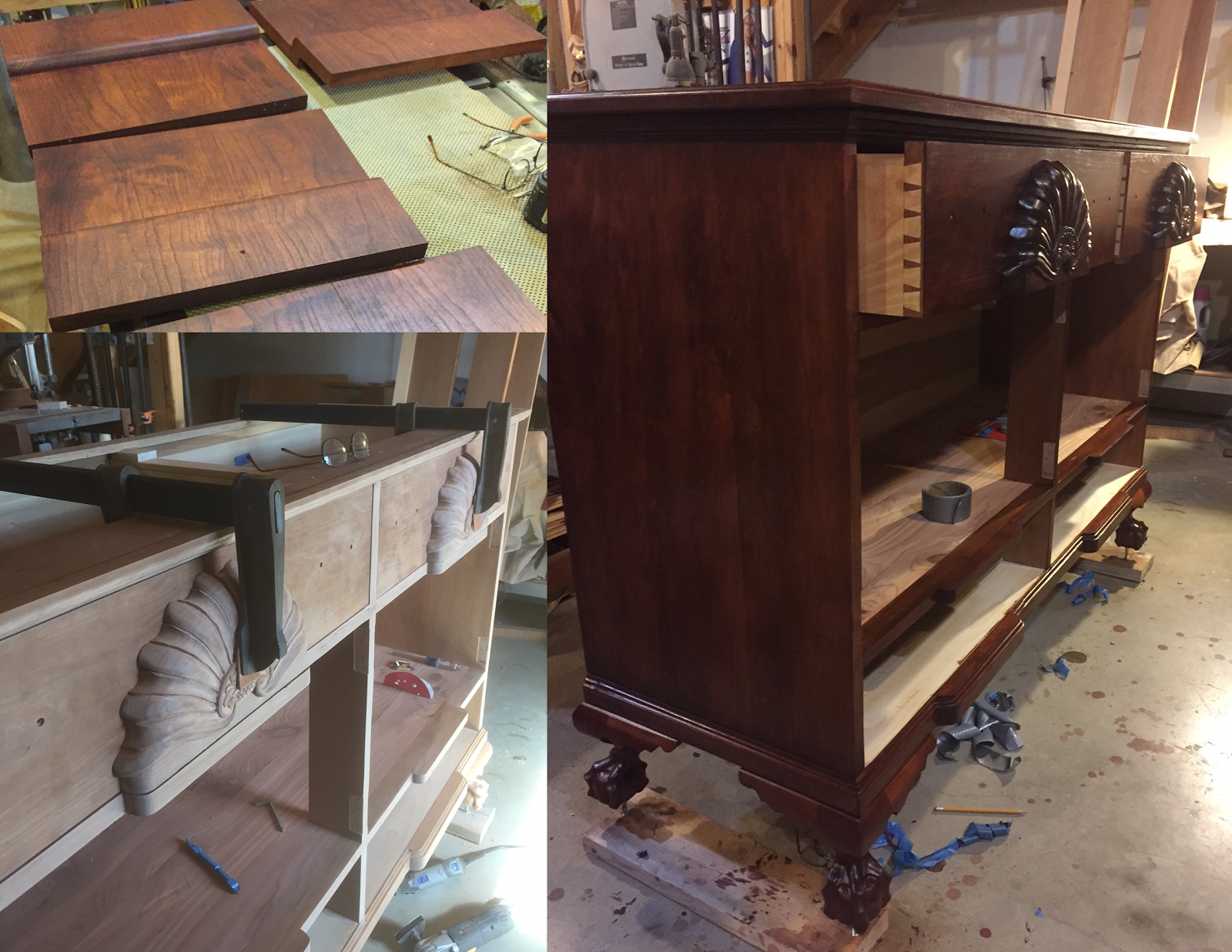 The making of a Grandfather Clock

The first rule of thumb of making any Long case clock is to have the movement first.  Many good woodworkers have made that mistake.  For this clock, I purchased the Kieninger 9 tube movement from Klockit below.  At $3,300 it is arguably the best new, mass produced movement available today. That cost includes the pendulum, weights, dial face and all.
http://www.klockit.com/products/dept-9__sku-13055.html

Notice in the above image that the back of the clock is a solid piece of walnut, 1" thick. This is where the clock strenght is. This way when the hood is slid on and off, the whole unit is sturdy and solid.

Final fit test of the nearly completed case.  The movement is permanently bolted to what is called the Seat Plate.  It is important that this seat plate be removeable for occasional clock smith servicing.  The case is stationary while the hood assymbly slides off and the seat plate can be slid out with the movement bolted to it after the pengulium, the 36 pounds of wieghts and 9 brass tubes are removed.
This grandfather clock lower compartment was designed and built to house a small kid in case of a wolf attack when mother is away as in the Story of "The Wolf and the Seven Little Goats". (Brothers Grimm)
Having been a year now since complete, I miss the time I spent on this very enjoyable piece. I had this design in my head for many years. It was good to let it out and become part of my everyday life as the chimes ring 24 hours a day. As I wind the weights each week, it's as though I have a lifelong friend. A difficult concept to understand for someone with little appreciation for hand made woodwork and beautiful wood.

I only hope that when I am someday unable to wind the weights and it's passed down to a loved one, they will equally appreciate it.

History of   The Grandfather Clock
Today, we know these tall clocks that are set in wooden cases to be "Grandfather Clocks." But, they weren't always called that. In fact, they were first called, "Longcase Clocks" or "Coffin Clocks". So how did they acquire their current name? Read this interesting article and find out the charming history of the Grandfather Clock.
Two Scientists and a Clockmaker Contribute
Although it's usually not among his list of popular contributions to the world, Italian scientist Galileo Galilei discovered in the year 1582 that time could be told by using a pendulum. Seventy-four years later after Galileo's discovery, a Dutch scientist named Christian Huygens built the first clock that used a pendulum. However, William Clement, who was a Dutch clockmaker, realized that by lengthening the pendulum, the time on a clock was more accurate. But, the long, three-foot pendulum he created wouldn't fit into a standard-sized clock case. So, in 1670, Clement built the first "long-case" clock with a pendulum. Clocks like this were also called "Floor Clocks", for obvious reasons, as well as "Coffin Clocks" because they looked like the wooden boxes corpses were buried in. This part of the history of the Grandfather Clock is entirely true. The next part of the story is supposedly true as well. Whether it is or not, you have to agree it makes the clock's history "charming" and certainly more interesting!
Some years ago, two brothers named "Jenkins" owned and operated the George Hotel, an establishment located in rural North Yorkshire, England. In the lobby of this hotel sat a long-cased clock. It just "tick-tocked" away and kept perfect time, until... one of the Jenkins brothers died. Then, the long-cased clock wouldn't keep the correct time. It always ran behind. The surviving brother brought in clocksmith after clocksmith, but none of them could figure out what was wrong with the timepiece. It just kept running slower.
Finally, at the age of ninety years old, the remaining Jenkins brother's heart stopped ticking, and he passed away. And, on that same day, the long-cased clock that sat in the lobby of the hotel stopped ticking too. The new owner left the clock at its location with its hands showing the very time that the second brother had died.